Consider a set of points in some space to be clustered. For the purpose of DBSCAN clustering, the points are classified as core points, (density-)reachable points and outliers, as follows:

Now if p is a core point, then it forms a cluster together with all points (core or non-core) that are reachable from it. Each cluster contains at least one core point; non-core points can be part of a cluster, but they form its "edge", since they cannot be used to reach more points. 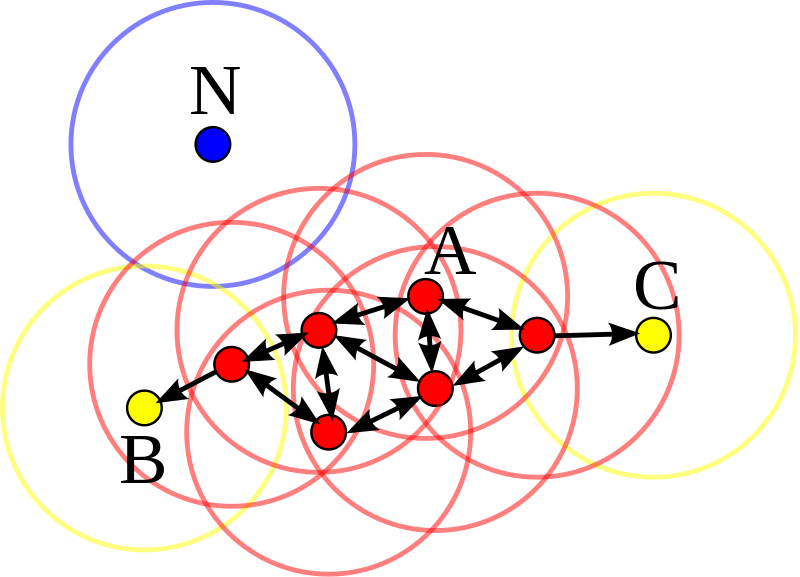 Reachability is not a symmetric relation since, by definition, no point may be reachable from a non-core point, regardless of distance (so a non-core point may be reachable, but nothing can be reached from it). Therefore, a further notion of connectedness is needed to formally define the extent of the clusters found by DBSCAN. Two points p and q are density-connected if there is a point o such that both p and q are reachable from o. Density-connectedness is symmetric.

A cluster then satisfies two properties:

DBSCAN requires two parameters: ε (eps) and the minimum number of points required to form a dense region (minPts). It starts with an arbitrary starting point that has not been visited. This point's ε-neighborhood is retrieved, and if it contains sufficiently many points, a cluster is started. Otherwise, the point is labeled as noise. Note that this point might later be found in a sufficiently sized ε-environment of a different point and hence be made part of a cluster.

If a point is found to be a dense part of a cluster, its ε-neighborhood is also part of that cluster. Hence, all points that are found within the ε-neighborhood are added, as is their own ε-neighborhood when they are also dense. This process continues until the density-connected cluster is completely found. Then, a new unvisited point is retrieved and processed, leading to the discovery of a further cluster or noise.

The algorithm can be expressed in pseudocode as follows:

where RangeQuery can be implemented using a database index for better performance, or using a slow linear scan:

DBSCAN visits each point of the database, possibly multiple times (e.g., as candidates to different clusters). For practical considerations, however, the time complexity is mostly governed by the number of regionQuery invocations. DBSCAN executes exactly one such query for each point, and if an indexing structure is used that executes a neighborhood query in O(log n), an overall average runtime complexity of O(n log n) is obtained (if parameter ε is chosen in a meaningful way, i.e. such that on average only O(log n) points are returned). Without the use of an accelerating index structure, or on degenerated data (e.g. all points within a distance less than ε), the worst case run time complexity remains O(n²). The distance matrix of size (n²-n)/2 can be materialized to avoid distance recomputations, but this needs O(n²) memory, whereas a non-matrix based implementation of DBSCAN only needs O(n) memory.