A triangle is a polygon with three sides and three vertices. Calculating its area efficiently depends on what is known about it.

From base and height

Assuming the base is put horizontally and the third vertex above it, the following picture results. Quantity b is the length of the bottom side, and h the height with respect to it. 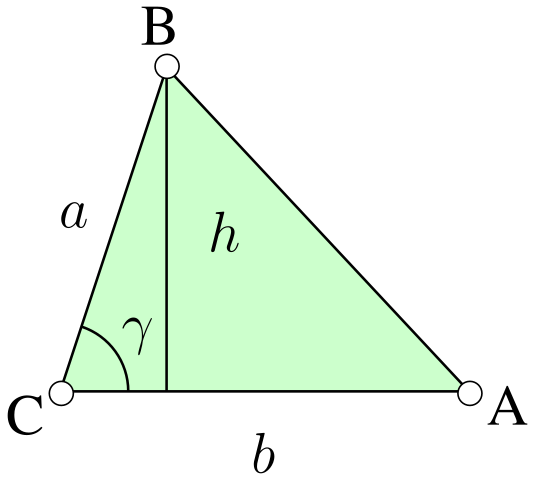 Height can sometimes be referred to as altitude.

In this case, the area is calculated as follows:

The algorithm can be derived directly from the defining formula above:

In the euclidean plane

In this section, it is assumed that the triangle is known by the coordinates of its three vertices A, B, and C on the plane:

In this case, the area of the triangle can be calculated as follows:

The following algorithm is a direct translation of the formula:

In the euclidean space

In this section, it is assumed that the triangle is known by the coordinates of its three vertices A, B, and C in the three-dimensional space:

The formula to calculate the area involves calculating the determinant of three matrices:

The absolute value of each determinant is the double of the area of the triangle obtained by projecting the target triangle onto one of the coordinate planes, which allows reusing the formula for the triangle in the plane in a previous section.

The following algorithm leverages the triangle area calculation in the plane, described in a previous section and not repeated here:

Note: the division by two in the formula is already included in the result from the calculation of the area in the plane.

All algorithms for calculating the area of a triangle in the sections above execute in constant time (O(0)).